The ANATOMY of POST-COMMUNIST REGIMES

Among the many specialized roles fulfilled by economic actors in various regimes, one occupation that shows ideal typical differences between the three polar type regimes is mediation between the spheres of political and market action.

Even when the spheres of social action are separated that does not mean that they are also isolated from each other.

They coexist in the same society, and they do communicate to ensure cooperation in general. Moreover, if the relation between the actors of different spheres goes beyond mere communication and involves the transaction of valued resources as well, the mediators can be recognized as brokers, that is, intermediaries in the process of exchange between actors.100 Yet “broker” is a general term, whereas the different level of separation of spheres in the polar type regimes gives rise to different ideal types of brokers.

In a liberal democracy, the mediator/broker between economic and political actors is the lobbyist:

• Lobbyist is an actor who creates contact between private actors (entrepreneurs) and public actors (politicians) through a legal, regulated and transparent way. His tasks, to which he is legally authorized, are (1) to represent the interests of individual economic actors toward political actors, (2) to communicate pieces of information to facilitate coordination of interests, and (3) to act as a broker in the legal process of exchange of valued resources between economic and political actors.

Lobbyists are typically employed by interest groups for the purpose of interest representation of societal actors, such as major entrepreneurs [à 4.3.2.3, 5.4.2.3]. Scholars have called attention to the phenomenon of “revolving doors,” that is, the movement from government service into the lobbying industry where former political actors can utilize their political connections in the interest representation of big business.101 However, that politicians may enter the economic sphere only after they have left the political sphere means precisely that the spheres of social action remain separated. There is regulated connection and cooperation between the economic and political spheres, via lobbyists, not a collusion of spheres where active political actors would also become economic actors [à 5.3].

In a patronal autocracy, the spheres of market and political action are formally separated but informally connected. Thus, mediation/brokerage steps out of legal and transparent channels in order to (a) connect participants of corrupt transactions and/or (b) legitimize illegitimate business deals as a judicial expert. Generally, such actor is called a corruption broker:

• Corruption broker is an actor who creates contact between private and public actors through illegal and non-transparent means. His tasks, to which he is not legally authorized, are (1) to represent the interests of individual private actors toward public actors, (2) to communicate pieces of information to facilitate coordination of interests, (3) to act as a broker in the illegal process of exchange of valued resources between economic and political actors, and (4) to guarantee the safety of the transaction as well as the protection from (legal) controls.

Corruption brokers appear in various forms in different types of political capitalism, that is, in every case when a transaction is made outside legal and regulated channels [à 5.3.3.2]. Focusing now on the setting of patronal autocracy, there are two main types of corruption brokers we can distinguish. First, there are the so-called gatekeepers, who are corruption brokers within the public administration employed to guarantee the bureaucratic background and protection of illegitimate deals. Gatekeepers include heads of law enforcement bodies, members of tender boards, judges etc. Second, there are the so-called corruption designers, who are usually not individual persons but firms, involved in the process of  transferring governmental monies into private hands. Corruption designers include law firms, tender writing companies, project management companies etc.102

Gatekeepers and corruption designers can also be observed in various regimes. However, they show a number of specificities when operating in a patronal autocracy, where, as we mentioned in Chapter 1, centralized and monopolized forms of corruption appear. First, in the ideal typical case, all mechanisms of control are paralyzed by turning their key figures into gatekeepers, answering to the chief patron. Second, different corruption designer firms are not employed individually by corrupt private actors but they work together, forming a unified machinery with division of labor, as part of the corrupt network of the adopted political family. Third, following the (informal) institutionalization of grand corruption, specialization takes place for the certain phases of corruption design, and each step in a corrupt transaction is covered by a specialized corruption designer firm. Finally, both oligarchs and poligarchs can have their own corruption brokers, although it is typical that the chief patron (usually a poligarch) disposes over the gatekeepers, whereas the oligarchs are in closer connection with the corruption designers.

In a communist dictatorship, the equivalent of the lobbyist of a private enterprise is called the tolkach (“pusher” or “expediter”) of a state enterprise:103

• Tolkach is an actor who creates contact between cadres responsible for economic units (state enterprise leaders) and cadres responsible for bureaucratic coordination (central planners and party cadres on higher levels) through an unregulated and non-transparent way. His tasks, to which he is not legally authorized, are (1) to represent the interests of companies toward bureaucratic coordinators and (2) to transact plan bargains, that is, to try to adjust the plan in terms of modifying deadlines or speeding the flow of products toward the firm through aggressive intervention or corruption.

The main difference between the tolkach and the two other types of mediators/brokers is that the tolkach does not work for the private benefit of his employer. Indeed, a tolkach is employed to help overcome the bottlenecks of the planned economy and to keep the factory operational. Kornai calls the acts of the tolkach a “vestigial form of market transaction:” “[if] a firm is short of a means of production (material, semifinished product, component) it seeks to obtain, it will try bribing the representative of the supplier firm with favors, gifts, or even money.

This effort replaces, in a distorted form, what would be in the case of market relations an offer of a higher price, except that the few officials involved in the transaction receive the extra, instead of the owner of the supplier firm.”104

Also, while neither the tolkach nor the corruption broker is legally entrusted to act on behalf of his employer, the tolkach does not act against the express prohibition of the law but rather outside the legal framework (hence his action is “unregulated”).

Furthermore, the corruption broker circumvents legal ways of advocacy whereas the tolkach circumvents the official (nomenklatura) ways. Indeed, the tolkach does not go through all the degrees of the bureaucratic administration, trying to lobby at the cadre directly above his employer and then move upwards step by step, but goes immediately to the highest office he can. And while the tolkach always acts bottom-up, employed to talk to people in higher offices, a corruption broker can be top-down as well when he is employed by a poligarch to connect him to his clients." 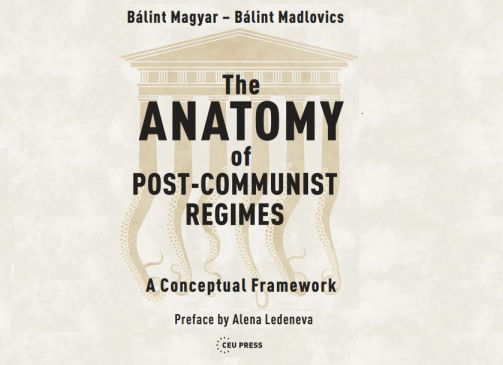 THE ANATOMY OF POST-COMMUNIST REGIMES